We were just starting to lead a relatively normal life when the new threat arrived in our lives. Omicron, once again, forces us to take extreme precautions, to be cautious with hugs and even to cancel some family gatherings in the coming days.
Even if the situation leads us to fall into discouragement, I would like to send with this last post of the year a brief message of HOPE, even at the risk of sounding corny.

Be mentally strong, even if pessimism gets the better of you, find the strength to spread joy, which is truly contagious. Nothing and nobody deserves that, precisely at this time of year, we feel sad. The promise of Christmas, of living what is important, of starting a new year, must win the battle against the virus. It is true that it is robbing us of trips, family moments, meetings with friends, but sooner or later we will get it back.

Let’s take advantage of this situation to get the best out of ourselves, to get to know ourselves even better, to live from the inside out, to reflect on our current life and consciously decide whether this is the lifestyle we want to embrace or whether we have been dragged into it until today.

Let us live the present with joy, yes, with the joy of feeling alive, of being alive.
And let’s dream, let’s dream a lot. May 2022 begin with new projects, new habits that help us to value what is important, which as we at Home Renaissance Foundation well know, what is important is usually the forgotten, the apparently unprofitable, the invisible, but at the same time what is essential to survive and overcome this and other crises that will come in the future.

Make home mean more than ever and love yours very much because it will be what you will have and keep forever.

In the past months, it has been impossible to ignore the cries for our world leaders to commit to combating climate disasters. From COP 26 to World Earth Call Day we see people coming together to share their stories of climate change and to try to make a difference.

Many of us have responded to the challenge of greener homes in recent years, perhaps by recycling more, by installing SMART energy meters or by switching to electric cars. Making greener choices.

Alongside the images of a warming planet what has also been striking is the level of wasted resources. Pictures of oceans full of plastic waste and of vast landfill sites are shocking indicators of a “throw-away” society.

If we look deeper and closer, we find other pictures. Those of people whose lives and livelihoods are affected by the wastefulness and “throw-away” actions of others. The places where children as young as seven work in dangerous conditions to produce the goods for a wasteful world. The homes where families are separated by the demands of punitive shift patterns. The very worst thing we can ever waste is other people. So a good question at any time of year, and especially at Christmas, is how do the choices I make in my home affect the choices and homes of others?

To do this we need to make informed choices. To take the time and trouble to find out where the things we are buying this Christmas come from. That gift might be packaged in bright and shiny wrappings but what are the conditions like in the far-away factory where it was made? Sadly, not so shiny in many cases.

In the midst of the busyness of our own lives, it is not always easy to take the time to find out, but increasingly charities and producers are helping us by making clear how, where and by whom things are made. In the United Kingdom Traidcraft has been a pioneer in this work. They sell only fairly traded and produced goods and gifts, often from small co-operatives working in developing countries. There are many other examples of this approach now. Ethical Consumer is an example of a site dedicated to providing real information on the products we buy.

This Christmas, as we very rightly take pleasure in decorating our homes and buying and receiving gifts, it would be good to know the glow was shared by those who made them. Truly, “Happy Christmas from my home to yours.”

The way life can be these days, rushing from work, to school, to home – sitting on buses, trains and in traffic – it is easy to miss the changing of the seasons.

True, we might notice the rain and the cold, but the real differences that mark the moving forward of the year all too often pass us by. Ask yourself this: when was the last time I really looked at the trees on my way to work or on the school run? When did I last look at the flowers growing – or not – in my garden or in the local park? Do I know which of the vegetables in my supermarket belong to this time of the year?

Autumn is, as the poet says, the “season of mists and mellow fruitfulness”. It is also a time of golden leaves and a rich harvest of good things to eat, drink and enjoy. But, blink and you miss it as we now find ourselves hurtling towards preparations for Christmas. One way to slow down the pace and to take stock of our surroundings is to bring some of the changes outside inside – into our homes.

Perhaps you have a memory as a child of a “Nature Table” at school? Or maybe you remember bringing home horse chestnuts “conkers” and pinecones from walks in the park? If these things gave you pleasure then, it is very likely they still have the power to bring you pleasure now. More than pleasure, in fact, more a real connection with the beauties of the natural world.

Look around your home for a suitable “space”. It might be a shelf, or a small table, or even a ledge by your front door. All it needs to be is where you will SEE it – and it not to get on your nerves! (Not where it will get in the way or get knocked over.) 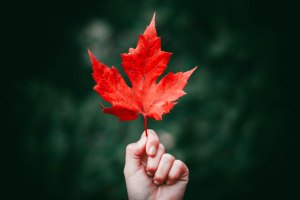 A small piece of fabric or paper in a season-appropriate shade could mark out the space chosen. The display depends on you – what you find and what you like. A typical autumn display might contain: brown, red and gold leaves from a range of trees; acorns, conkers and pinecones; a miniature pumpkin or squash, a small jar of asters-“Michaelmas Daisies” – or chrysanthemums; a bunch of grapes or some rosy apples. In other words, anything that brings the season’s glow into your home – and life.

It reportedly cost the retailer John Lewis £7m to produce its latest Christmas video. The animated advertisement features a bear who repeatedly sleeps through Christmas while hibernating; until a neighbourly hare buys him an alarm clock.

Whether cryptic or mawkish, the commercial represents money well spent for John Lewis. For big retailers healthy Christmas sales can make the difference between a good or bad financial year. By associating itself with the warm glow of the festive season, John Lewis – and the other retailers who have aped the idea – associate themselves with the spiritually galvanising best of Christmas. The marketeers, skilled practitioners in the dark arts of sub-conscious nudging, have hit upon a clever way of linking a particular brand with a feelgood annual event.

g new in this, of course. Think about the way the Coca Cola company appropriated Santa Claus in the 1930s. But for those of us who believe that Christmas traditions are something which spring from and belong within a family home, there is something hollow about the way shopping seeks to supplant something more wholesome, less ersatz.

It is a big tide to push against. But, in a modest way, inspiration comes not far from the offices of the Home Renaissance Foundation. The Geffrye Musuem in London, which celebrates its centenary next year, is putting on an exhibition entitled ‘400 Years of Seasonal Traditions in English Homes’.

Any historical assessment of Christmas traditions will always provide an antidote to its modern incarnation – for many – as a carnival of indebtedness, office parties and bad woolly jumpers. The story of the birth of Christ, now so frequently airbrushed out the ‘Happy Holidays’ picture, is front and centre

But the Geffrye also reminds us that Christmas traditions have to start somewhere. No family is a tableau rasa, and there are things that I do with my husband and children at Christmas which have been handed down through the generations. 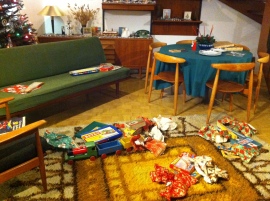 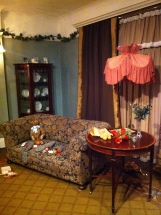 Yet there are also new twists. The crockery which I bought in Brussels which only comes out on Christmas Day, the order in which we open presents, the games; these are the stuff of cherished memories. They are our creations, spontaneous, meaningless to anyone outside the family, not the brainchild of a slick creative mind at John Lewis.