This week saw the publication of Home Renaissance Foundation’s pioneering book on the home and the challenges and opportunities of new technologies. 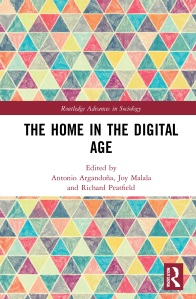 The Home in the Digital Age seeks to place the home at the heart – or as the hub – of the ethical, social and economic considerations generated by the AI revolution.

When this material was being prepared in 2019 there was no glimpse of what 2020 /21 had in store. The Covid-19 pandemic has made the arguments in this book more urgent and prescient than anyone could have imagined. For the majority of people across the world the home did indeed become the hub last year– the place where domestic and professional life had to rub shoulders and sometimes tripped each other up.

Historian Stephen Davies, in his chapter with economist Maria Sophia Aguirre, addresses “Automation, the Home and Work” and sheds revealing light both on how we find ourselves where we are now, and the best way forward. Dr. Davies reminds us that the removal of home from the centre of the understanding of work is a recent phenomenon. Until the mid 20th century we did not think in terms of people as individual economic units, but instead saw the household as the foundational unit “physically embodied in the home, which was not simply an address or residence but rather a social unit with a set of social connections as well as a physical location.”

Further back in time, whole households were engaged in producing goods and services within the home as well as maintaining the domestic structure and nurture of the home. Mechanization – early automation – took such “cottage” industry as spinning and weaving into factories and out of the home sphere. The regulation and labour safeguards of this new working world trailed far behind its widespread introduction.

The current new age of automation, all that is meant and predicted as Artificial Intelligence, comes at a time when the older understanding of integrated, mutually dependent household or family units has been replaced by the individual focus. What are the implications for the redistribution of work from such individuals to non-human producers/processors? How is human work per se to be valued? How is the individual supported in the new work world?

The answers are within the home. Within the work of the home there is scope for increased automation and SMART technologies. In WFH (Working From Home) we see signs of the factory returning to the cottage. What has not returned is the understanding of that work as a shared function of the household. Being cooperative with and responsive to the contributions and needs of all in this wider foundational unit should be seen as key, in human and economic terms, to the integration of the new machines.

As Dr Davies concludes, we should “bring the home back into our field of vision when we consider the impact of automation.”

At HRF we understand that the home is at the cutting edge not just of the “digital age” but every age. Looking after it and recognizing its value is more vital than ever.

This site uses Akismet to reduce spam. Learn how your comment data is processed.