There’s no denying that the internet is immensely useful – connecting young people with their friends and with just a few clicks, a world of information comes to our screens. But as most of us have discovered, it comes at a price – it’s hugely addictive!

We all know people who just seem unable to look away from their devices and see so many youngsters today absorbed by their phones as they walk along the street. Their eyes become glazed and it takes a lot to peel them away from tablets, laptops or smartphones. Technology is controlling us rather than the other way round. The only way to keep it in check is a digital detox at least once a week where everyone puts away their devices and speaks to each other, before we risk turning into social recluses. And where does most training begin? Naturally, in the home – it’s where our core values are nurtured and reach fruition.  It calls for a day a week when the family sit down together and chat or go out for a walk come rain or shine, when we challenge ourselves to achieve something rather than retire to the comfort of the smartphone when the forecast doesn’t look too bright. 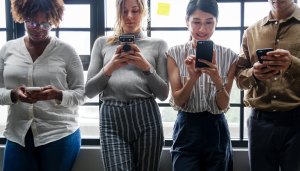 According to Dr Tim Elmore, Founder of ‘Growing Leaders’, an organisation dedicated to mentoring young people to become the leaders of tomorrow, parents need to stop mollycoddling their children. They have to teach youngsters to possess true “grit” if they are to survive the digital era of instant communication, where everything happens at the click of a switch and people can feel overwhelmed by the demands being made of them. Dr Elmore, whose two children both suffered severe bouts of anxiety as they were growing up even though they came from a “healthy” home, states in his book ‘Stressed Out’ that today’s adolescents are “overcommitted”, “overexposed” and “overprotected.”

“Parents have often nurtured them, coddled them, and done a much better job protecting than preparing their kids for the world that awaits them as adults. We’ve prepared the path for the child instead of the child for the path. It would be easy to assume this is only true for adolescents from very busy and affluent areas….. but it’s happening everywhere,” says Dr Elmore.

“One could argue we should be the happiest, most well-adjusted people in history with more technology, more conveniences, more stress-saving devices available than ever. Sadly we seem to be more depressed than previous generations. Times in the past were simpler and we expected to get less done during the days, we attempted less during any given day. All of the clutter and expectations are catching up on us. There are lots of things screaming at us to stimulate us –so when we are experiencing periods that are not stimulating we can feel down,” he said.

He recommends that the quickest steps children can take to maintain happy lives is to have “margin” in their days. “Those who are emotionally healthy are those who create margin in their calendar,” he says. “They schedule portions of their day to create space. They remove noise and clutter during those portions of the time. They experience solitude, quietness, simplicity. They take control of their day instead of remaining at the mercy of the busyness going on.”

According to neuroscientists, it’s when we’re bored that we can be most creative. So let’s all ‘unplug’ periodically, show more empathy and use our imagination to greater effect!

This site uses Akismet to reduce spam. Learn how your comment data is processed.